I’m sure you have already read The 7 habits of highly Effective People by Stephen R. Covey, right?  Or maybe you never really finished the book or just flipped through it. That’s okay too. Later in this post, you get a resumé in a video that only lasts 6 minutes.

THE 7 HABITS OF HIGHLY EFFECTIVE PEOPLE:

WHAT DO THEY MEAN TO ME?
For many years, I was intensely occupied with the first habit about being proactive. Because I was the exact opposite! My whole life was reactive and I felt like I had lost control with where I was going. I focused entirely on all the things I found to be wrong but that I had absolutely no control over. To focus on wrongs that lie miles outside of your circle of influence doesn’t make a person happy.

Habit no 2,  Begin with the end in mind, was in the back of my mind when I chose to resign from my old job and change the course in my life. I kept asking myself the question: What would you do if you weren’t afraid and every time I came to the conclusion that I would quit my job. A job that made me miserable. So I did. The time that followed was full of hope and insecurities but I also remember a strong inner voice telling me that everything was going to be okay. Until this day, it’s still one of the craziest things I have tried. Not quitting my job but that the inner voice spoke to me so clearly. What happened next was that I wrote a book that became one of the bestselling books in Denmark in recent years and my newly started company took off and had lots of success.

These past couple of years, habit no 3, Put first things first, has been more and more present in my life and it’s one habit that I still work with every day. I often ask myself the question: What is my goal? Where do I want to end up? And straight after: So do I spend my time according to my goals? It’s pretty darn difficult but it’s so important to at least be aware of the possible dissonance between the two.

Habit no 4, Think Win-Win, has also meant more and more to me during these past years. I’ve written about it on several occasions in more vague terms like “karma” or “universe”. I’m usually not a spiritual person at all but in this matter, I am a little bit. I believe that if I send out positive things to the universe, the universe will return positive things. I realize how this sounds but it’s generally how I operate. I don’t put other people down to make myself look better.  The words For you to win, another person does not have to lose holds so much truth to me.

Habit no. 5, Seek first to understand, then to be understood is about listening to understand, not to answer. And that is so difficult to practise. Both in general and as a blogger and I practise this skill every day.

Create synergy,  Synergize, is habit no 6. Creating synergy means that the end result grows bigger than the small parts it consists of. It’s a habit that deserves some more attention in my life.

Sharpen the saw is habit no 7. It’s about investing – in yourself – because, even though it will require both money and time, it will eventually bring the end goal closer. This habit is so relevant for me at this point. Especially work wise. I have long considered hiring some help. Actually I have decided to do so but something inside me makes me hesitate. And that’s so silly. I have so many ideas and plans for my little company and I have reached the limit of what I can actually achieve on my own. It’s time to invest!

It really wasn’t my intention to write so detailed about each habit but I got carried away. Instead I wanted to share a little video with you that I saw the other day. It’s a recap of the 7 habits and it’s so perfectly put that if you don’t have time to read the full book, you actually get a feeling of each habit here. And even if you have read the book, I’m sure you will still see the habits in a new light here. 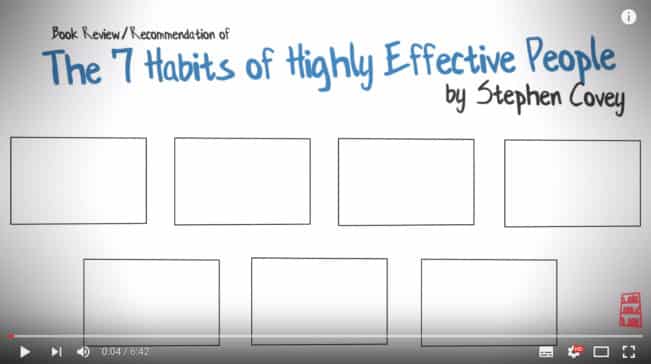 I think I might bring to book with me on my summer holiday and read it in full length again. I think it’s time.

We’re leaving for France in a couple of days so this blog will probably be fairly quiet over the next few weeks but I’ll see you all after the summer. Take care!