I lived 2 years in Paris when I was young(er). Since then I’ve visited Paris almost once every year. I love that city and it still feels like home even though it has now been 16 years since I moved to Copenhagen. I can’t believe it has been that long.

We just spent five days in Paris last week. We met up with my dad and his wife who live in the south of France and my sister got on a plane and came and spent a few days with us. A family trip, three generations. And we just had the best time.

It’s the second time I brought the twins. Last time they were 5, I think. Now, they’re 10 and that means that they can easily spend an entire day walking, because really, that’s what you do in Paris, and it also means that we can take them to good restaurants.

I have lots of favorite restaurants in Paris and today I thought I would share them with you. It’s hard to chose though. Paris has more than 14.000 restaurants. This is not a guide to the best Paris restaurants but merely suggestions to nice places where you can have a decent meal. I don’t chase Michelin stars, I go for good food and good ambiance.

Here are my favorites:

Robert & Louise
My relationship with Robert & Louise is a bit special since they used to be my neighbor. Back then the restaurant was run by an old married couple and the dad would be in the kitchen which meant at the back of the restaurant chopping and cooking meat over open fire and the mom, Anita, would wait tables. And she was incredibly rude to the clients who were all locals back then.

Today, it’s a different story. The next generation has taken over the place and it has become quite popular with tourists. Especially Americans. But the place looks the same and it’s like you’ve entered a different century. And they still cook steaks on open fire. Try their côte de boeuf (must be shared by two). Come early or book in advance. 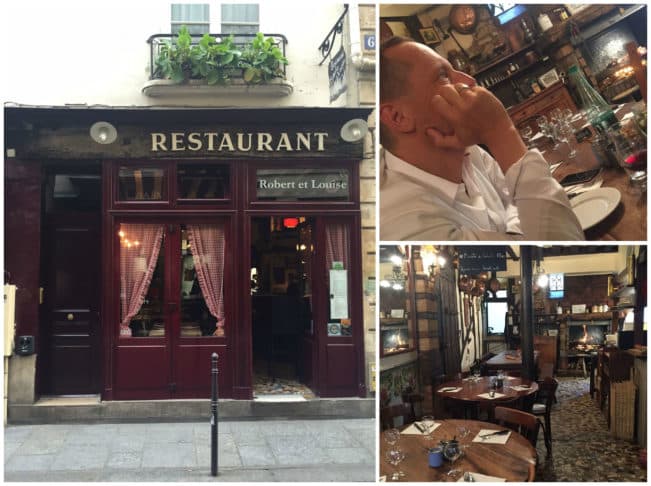 Jaja – “Jardin Urbain”
JaJa hides in a back yard in Marias (my favorite area in Paris) and they call themselves an urban garden. Fresh and nice food. Lots of green dishes and lots of fish. 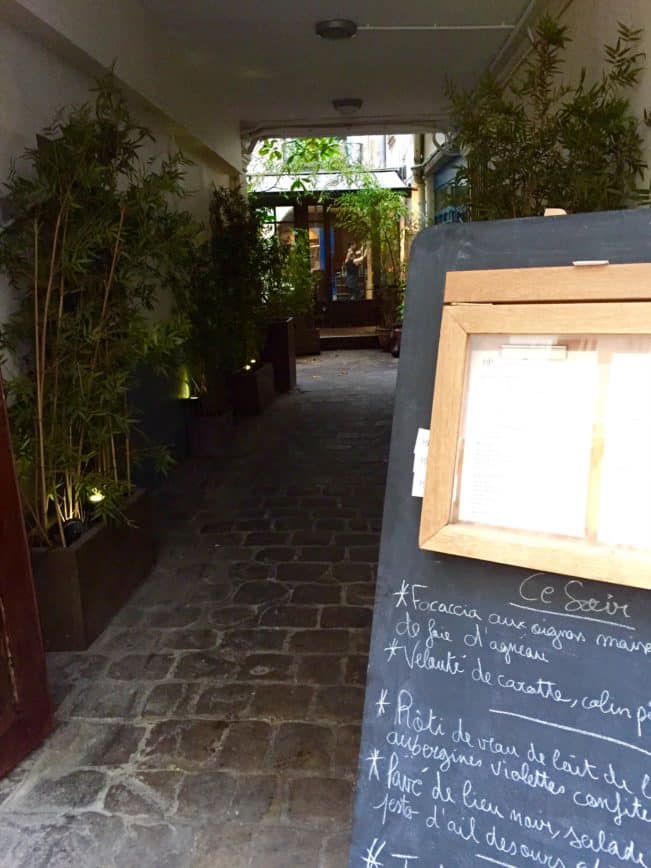 Café Pinson – cuisine healthy
Pinson is a new place I just recently discovered but they completely won my heart. It’s a young and trendy place with healthy (sugar- and wheat free) food. Lots of vegetarian dishes but also a few with eggs.

They are a good place to grab brunch or lunch as they serve mostly salads and soups but they also had little sweet treats and chis pudding when we were there. 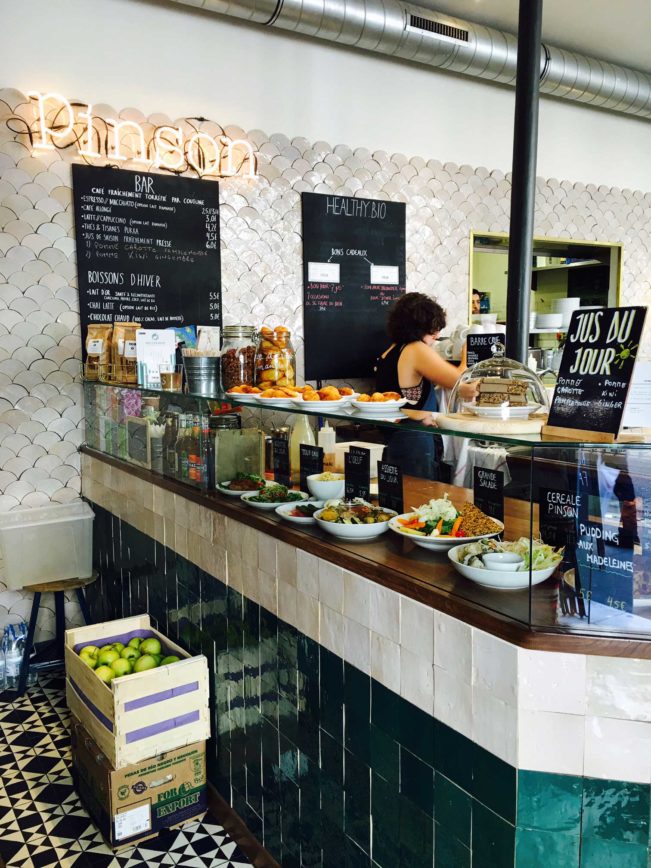 Season – Instagram friendly food (#glutenfree)
Season is one of the top 10 most instagrammed restaurants in Paris and if you go to visit, you’ll understand why. They serve all the hyped food you see on Instagram. The Acai-bowl and the Matcha bowl with their lined toppings, avocado toast with poached egg, toast with almond butter and banana and lots of other brunch and lunch options. And obviously  “eau infusé” – infused water with fruit and veggies. Most dishes have gluten-free option. 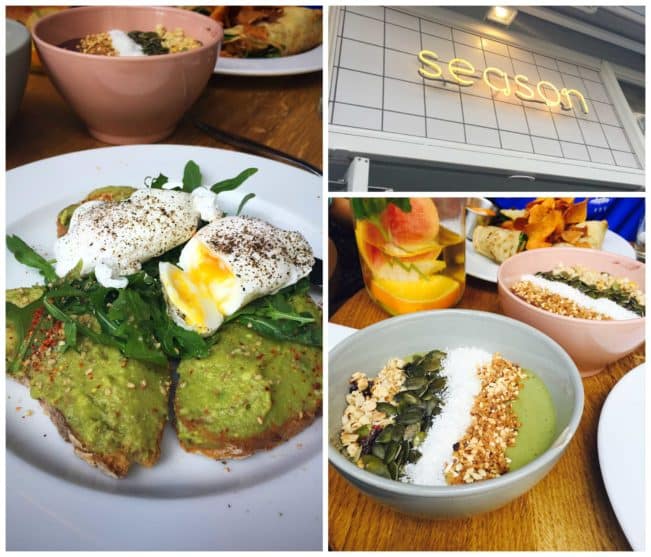 42Degrès – the first raw food restaurant in Paris
Paris has been quite slow to adopt the raw food trend but they do have at least one raw food place. The food was quite nice but it wasn’t the best raw food I’ve had. And the place lacked ambiance.

I also missed all the raw cakes which I adore. They did have one on the menu and it wasn’t fantastic either.

I did enjoy having a light green meal after a night of heavy food and too much wine. 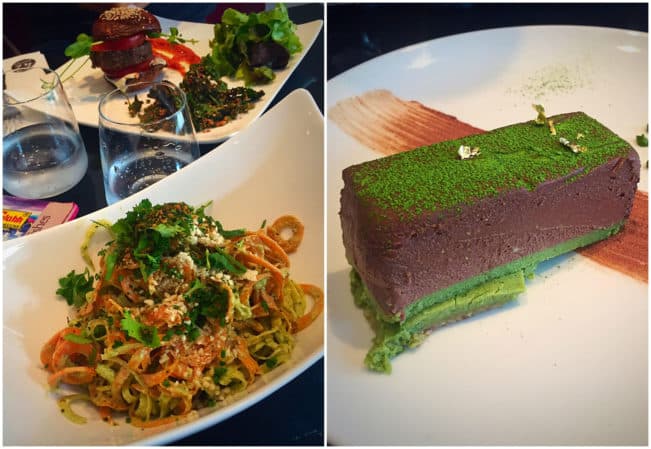 Au Vieux Paris d’Arcole – the most beautiful restaurant facade in Paris
When you go to see Notre Dame, don’t forget to go down one of the little streets to find this little gem. It’s surprising to find a place like this in one of the most touristed areas of Paris.

It’s one of the oldest restaurants in Paris and the building dates back to 1512 where it used to house the main priest of Notre Dame. The food is classical French. If you’re interested in wine, make sure you visit “la cave” (the wine cellar). 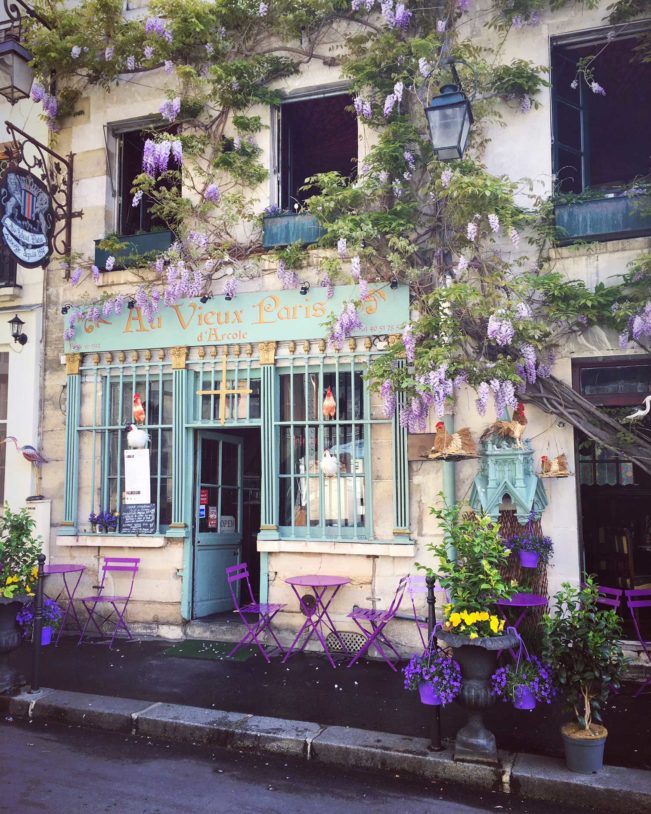 Clamato – modern fish restaurant
We tried for weeks to get a table at Septime but when we didn’t succeed, we went to the sister restaurant Clamato instead. Clamato only serves fish in a share food kind of arrangement with lots of small dishes. We didn’t have patience to  pick from the menu so we just let the kitchen bring us different plates. And it was delicious!

The place was really cool and the servers were nice and attentive. 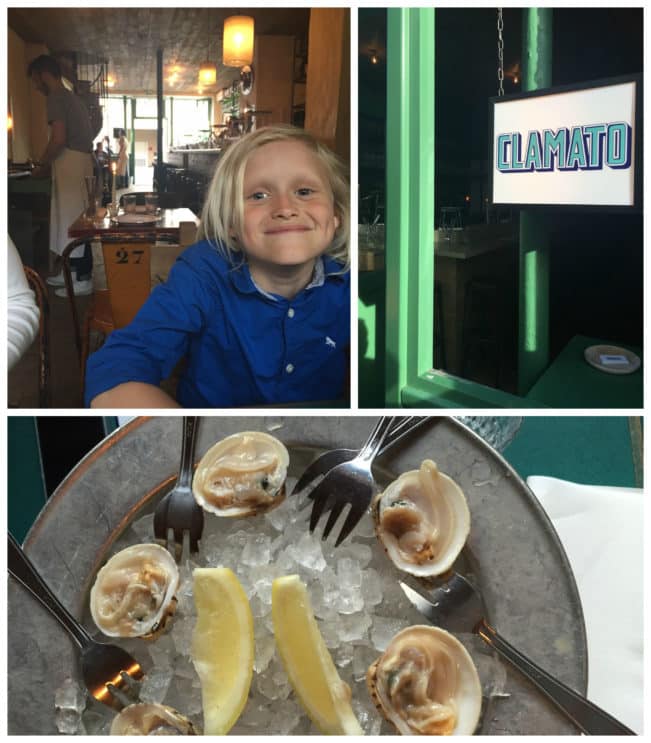 Le Cornichon
We had a great time at Le Cornichon but we were also quite challenged. We booked a table in advance because Søren saw it recommended somewhere but none of us bothered to check out the menu before hand.

We don’t serve classic dishes, the waiter said. No kidding, I thought, looking at the menu. It was quite experimenting! But you know what? It was really, really good. Like really good! The combinations were strange but surprisingly tasty. I had some kind of fish literally wrapped in pork and served with an algae salad. Doesn’t sound too delicious, does it? Well, it was! And the waiters were really nice and did everything in their power to make us feel good. 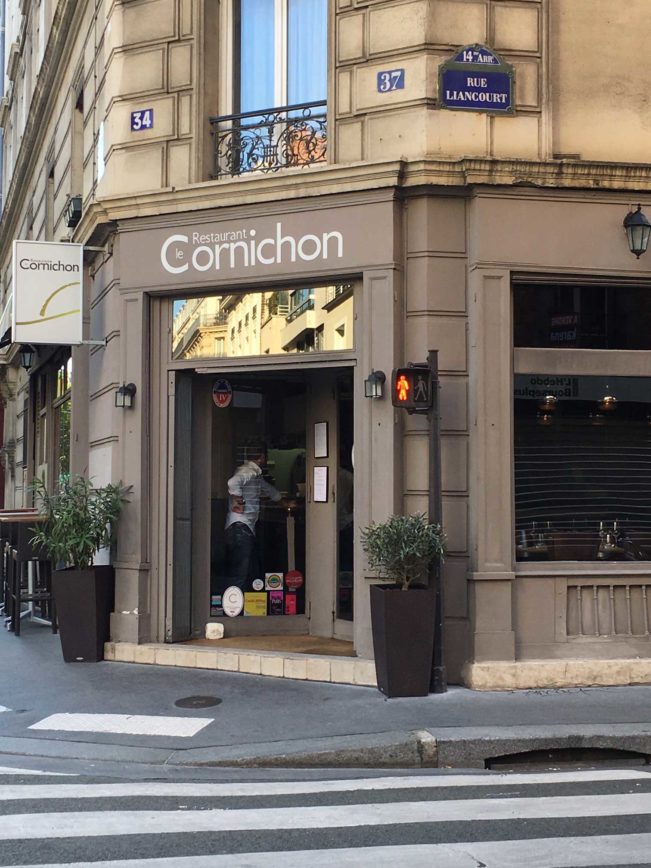 Les Petites Carreaux – classic French bistro
This type of bistro you’ll find on every corner and I don’t think this one is better than the next one. But we’ve been here so many times that it has become a tradition that we go there for lunch.

Tables are small and you sit elbow-to-elbow with French people and it just feels rather local.

This bistro is on the top end of Rue Montorgueil which is like a foodie’s Paradise (see below). So chances are you’ll go to this area anyway. 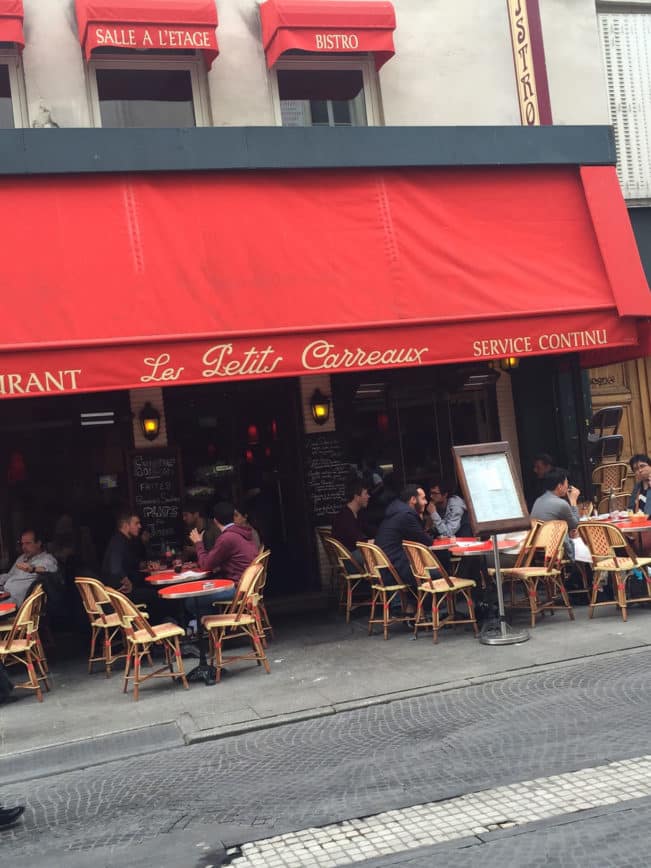 Aux Vieux Comptoir
This is also a place I keep returning to. In the middle of hectic and not very charming Rue de Rivoli, you just go down one of the streets on your left before the Louvre and suddenly you’re in this quiet street and find this very French place that serves traditional French cooking. 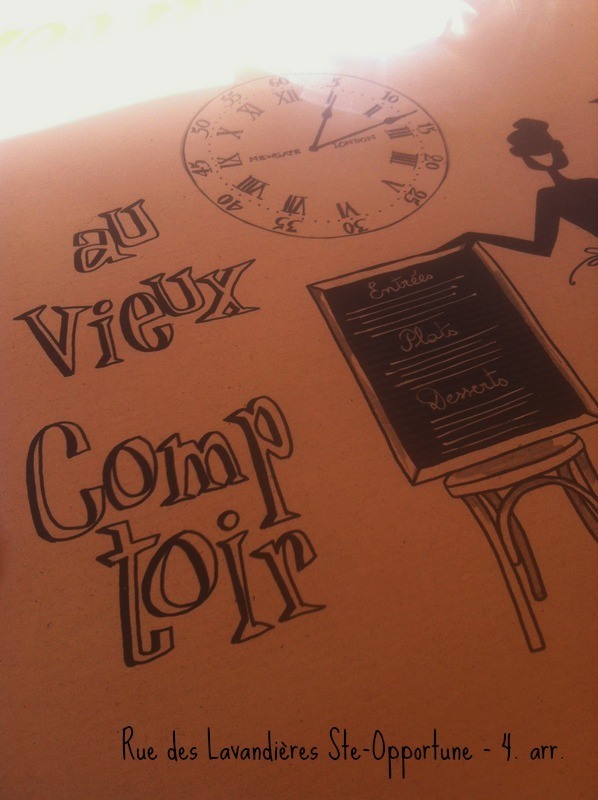 Ratapoil du Faubourg
This place was such a pleasant surprice. We ended up here by accident and had the most lovely meal.

The restaurant serves a different menu every day according to what they could get on the market. The food is fresh and light and green. But with meat/fish/poultry too. You can have either several small dishes or a traditional three course menu. We had the small dishes. I had some lovely fish, a green plate with peas, asparagus etc. and some kind of rabbit dish in mustard.

I will definitely come back here! 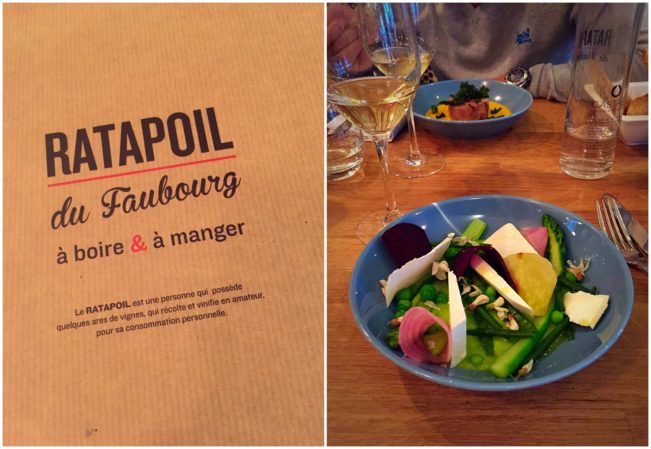 Wine bar – Septime la Cave
When we had dinnner at Clamato, we started the night at their wine bar across the street. It was such a nice and rustic place and we would never have found it if we didn’t know about it before. When it’s warm outside, people stand on the sidewalk drinking wine. 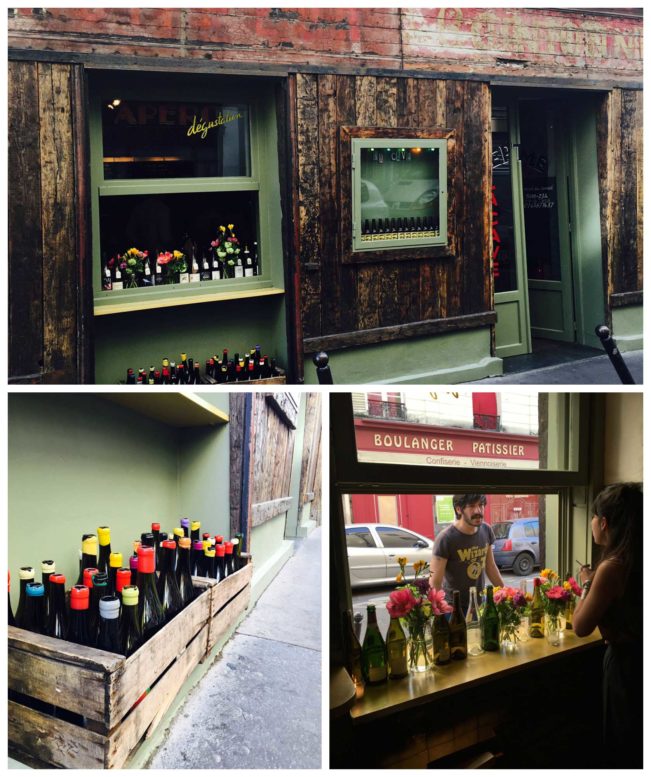 Grazie – if you want pizza, have it here!
If you want to eat pizza in Paris, I suggest you do it here! Italian pizzas made in a stone oven and topped with fresh mozzarella, parmesan and rocket. They also have low carb dishes if you don’t eat bread (like me), like a Vitello Tonnato (veal with a tuna sauce) or salads.  The place is trendy, dark and music is quite loud.

There’s a line outside of people waiting to get in almost all day long despite the fact that there are several fallafel places in the street. You’re in the Jewish area of Paris and you probably want to visit that anyway so why not have a fallafel now that you’re here. 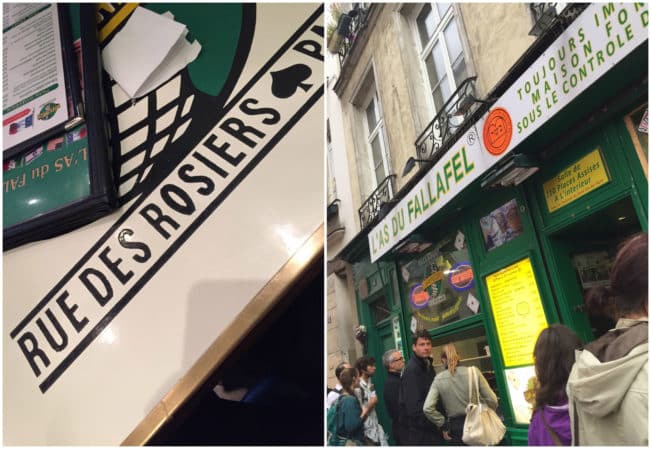 Rue Montorgueil
This street is a pedestrian market street and one of my favorites in all of Paris. Here you find lots of little cafés and food shops selling cheese, meat, fish, fruit and veg, wine etc. 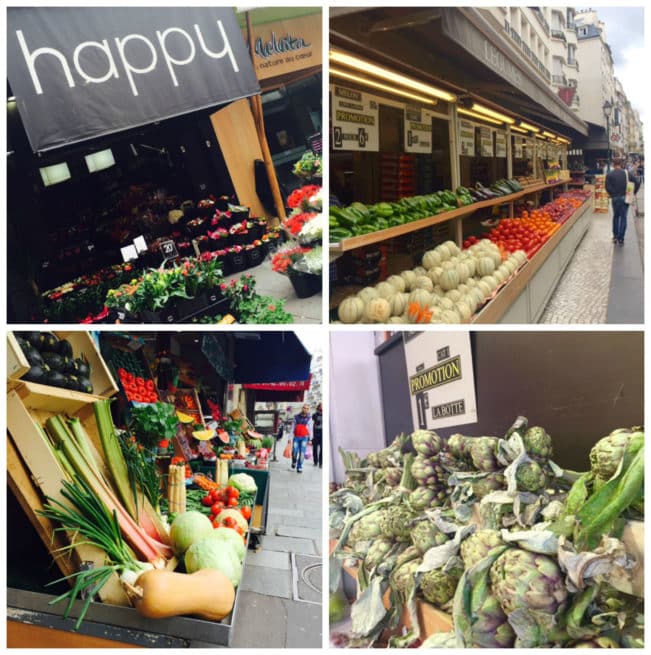 La Grande Epicerie
They call this the world’s best supermarket but personally I think that Whole Foods run with that title. La Grande Epicerie is a foodie’s paradise though with all the specialties in the world.

You’re not allowed to take pictures in there so I can’t show you.

Chez Causses
If you’re in the 9th arrondissement, check out this lovely food store. Lots of fresh organic produce on the shelves. 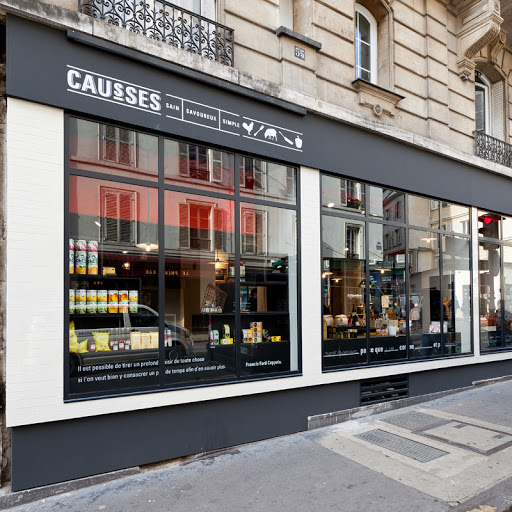 Naturalia
This is a chain of small organic stores. It’s like a combination of your grocery store and your local health store selling both eggs, meat and veggies but also vitamins, gluten-free products, skin products etc.

Bio c’Bon
This is also a chain of little organic supermarkets and you find them on almost every street corner. Here you also find healthy convenience foods making it fairly easy to eat healthy on the go.

Le Marché des Enfants Rouges
This is a sweet little market selling fruit and veggies, organic produce, flowers and it also have a few small restaurants. The market has its name from when it was an orphanage where the kids had to wear red clothes.

VINTAGE SHOPPING
If you’re anything like me you love going vintage shopping and then Paris is the place to go. Over the past couple of years, vintage shops have opened all over Paris.

If you only have time to go to one place, go to Rue de la Verrerie in the Marais. In the end closest to Les Halles, you have three vintage shops right next to each other.

My favorite was Kiloshop where you buy vintage clothes by the kilo. LOVE. IT.!

The area around Les Halles also has many vintage options.

A few adresses to navigate after: