OMG, these hash browns were delicious! I could hardly concentrate on taking the photo before eating them. And the family totally agreed! One of them even said: Wow, I wish I could have a whole meal only with those! Well, I guess you could. But I would have to make a larger portion then!

I’m telling you, they’re that good and I just know I’m going to be making them again and again!

We had them for dinner last night together with a bunch of leftovers. I deliberately didn’t serve the whole portion because I wanted to save some for my breakfast this morning. And they go just great with a couple of fried eggs. What a great way to start the day!

We eat lots of root vegetables this time of year. It’s like a Scandinavian staple. It comes with the cold temperatures, I guess. Celeriac is one of my favorite root vegetables and one of my go-to replacements for potatoes. I use it for oven baked fries, for mash and I even eat it raw in salads. My favorite is shredded celeriac, shredded carrot and topped with avocado and sunflower seeds. I never get tired of that dish.

Well, and now I also use it for hash browns! 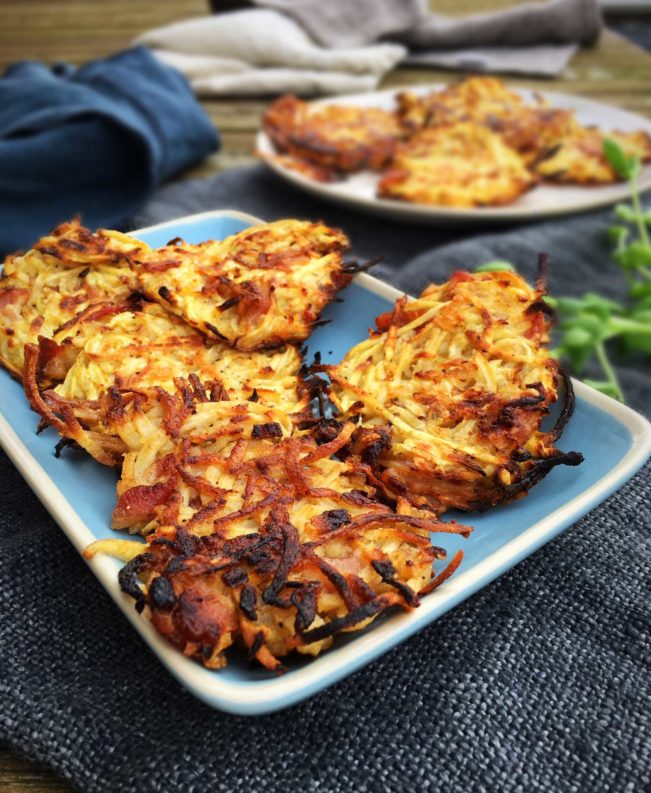 
1. Celeriac looks a bit hostile but don’t let it scare you! First cut off the bottom (where all the dirt is) and then cut off the peel from the rest. Use a sharp knife. Shred the peeled celeriac in your food processor!

2. Pour the shredded celeriac into a large bowl.

3. Heat coconut oil in a skillet and fry bacon and chopped onion together until they turn golden brown. Put them in the bowl with the celeriac.

4. Put the grated parmesan in the bowl as well and salt and pepper.

5. Now mix the celeriac with the two eggs. You won’t get a firm batter and you’ll probably thin that they will never turn into hash browns but don’t worry! They will when you bake them.

7. Place your celeriac batter in little tops on a baking plate lined with parchment paper. Flatten them with a spatula. Bake them for 10-11 minutes, then turn them and bake them again for another 8-9 minutes. When they’re golden brown and a bit dark around the edges, they’re finished.

FOR AN EVEN LOWER CARB VERSION
You can use cauliflower instead of celeriac for a version with even fewer carbs. I like them both but I do prefer the celeriac version. It gets firmer and they seem to get a better crust and they remind me more of real hash browns whereas the cauliflower ones ressembles the veggie breads more.