I don’t bake often. I don’t really eat bread of any kind and when I do, I prefer the veggie based breads which are hardly bread at all. Most of the LCHF bread recipes I’ve made for my books have been made with various nut flours and they all get this sweet flavor. I don’t always appreciate my bread rolls to be sweet. I’d rather have them salty to be honest. In Denmark, the LCHF-movement has grown so big that the supermarkets have started taking home many kinds of gluten free and low carb flour types. One very interesting type is dried potato fibre from Semper. I know that the word potato makes many a low carber twinge. But this flour contains very little carbohydrates, it’s fiber rich and it’s so light that you only use very little of it when measured per weight. But the really good thing about is it’s cheap, it’s available in supermarkets and not only in health food stores and it has literally no taste! No nutty sweet flavor here!

The day yesterday was a bit strange. We woke up to the news about the Paris attacks and felt pretty shook up about that. It was also Søren and my 12,5 wedding anniversary. We call that a copper wedding but I don’t know if that’s an internationally recognized term. We didn’t have many plans for the celebration as we’re still celebrating the twins every weekend so we just had a nice and quiet afternoon with just the four of us. We walked into Copenhagen to a really cool urban market where you can buy all kinds of delicious food stuff. We bought some lovely food to bring home for dinner and had a nice evening watching the football match Sweden-Denmark which Sweden won, damn it!

But now back to the fiber bread rolls. Vega thought these were great but that girl love anything she can spread butter on. Silas gave them the score “medium”, which in kiddie languages means “well, they’re okay, just not fantastic”. That’s as far as it gets with him! I think they’ll do pretty good for breakfast with butter and cheese or even in the lunch box as a sandwich. 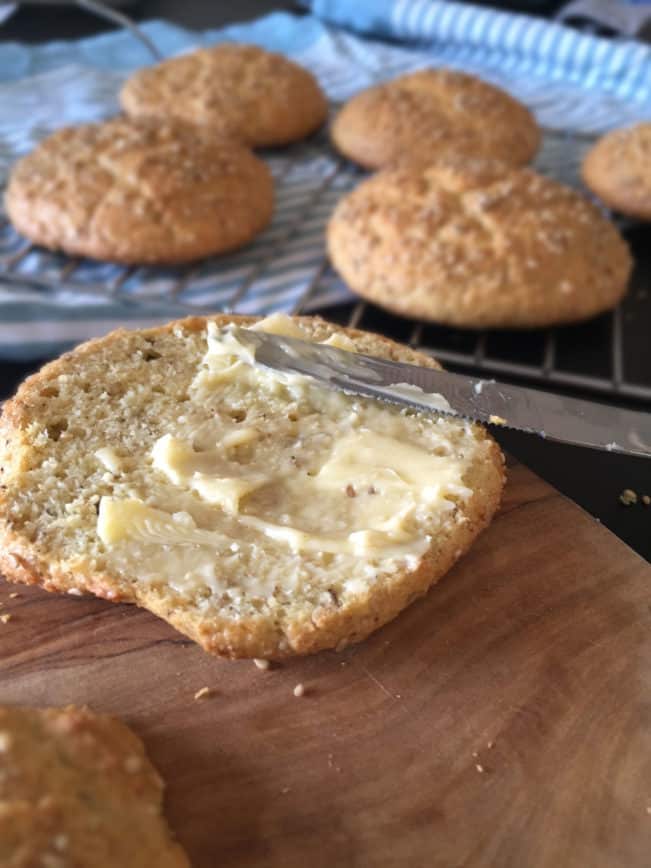 3. Pour the blended egg mixture in a large bowl and add the rest of the ingredients. Mix well with an electric beater. Let the dough rest for about 10 minutes to allow the fibres to absorb the liquid. Don’t skip this step. The dough won’t become firm as you know it from a normal dough but it will have a more fluffy texture. This is normal.

4. With wet hands, shape the bread rolls and place them on a baking dish lined with parchment paper. Sprinkle some extra sesame seeds on top.