I have a thing for sesame seeds at the moment. I put them on everything! Now also chocolate. If you haven’t tried the chocolate-sesame seeds combo, I strongly suggest you give it a go. It’s a tiny bit odd and delicious at the same time!

The idea was first introduced to me back in 2013 when we were shooting photos for my first book. We had some leftover melted chocolate and my assistent Anne mixed it up with sesame seeds. I remember thinking this was a brilliant combination and then completely forgot about it. Until yesterday when I made it for my family as a Saturday night treat.

It’s not much of a recipe, really. It’s just dark chocolate and sesame seeds. I add a little coconut oil as well. It makes the chocolate melt in my mouth. 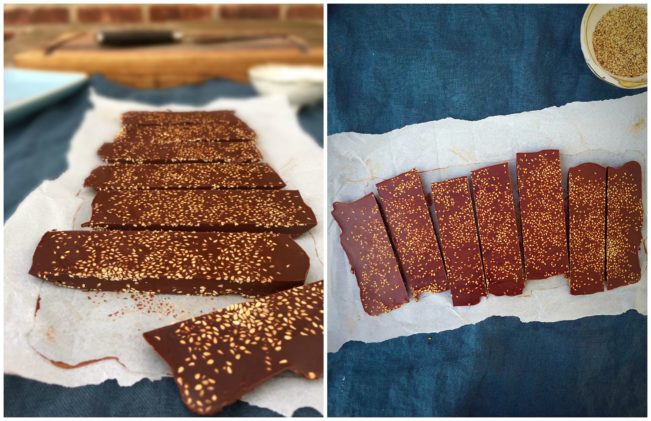 *If you think to yourself that 160g was an odd number to use and that I probably ate the remaining 40g before making these, you could easily be right! You’re not this time, though. I used chocolate 85% and they come in 80g packages. Had they come in 100g packages, I probabably would have eaten the 40g and made sesame chocolate from the rest.

1. Melt the chocolate in a double boiler with coconut oil.

2. Place the sesame seeds on a plate covered with baking paper and pour the melted chocolate over.

3. Put the plate in the fridge or the freezer and let it harden. Take out, cut into smaller bites and serve.

TIP: for an even more concentrated sesame flavor, you can roast the sesame seeds on a dry frying pan before using them.