This summer we spent some time in Barcelona. This was my third time in Barcelona and even though I’m more of a “Paris girl” (I lived in Paris for two years when I was younger), Barcelona has really captured my heart.
Generally, I find it’s fairly easy to eat healthy in Barcelona (or anywhere else in the world) but this time we found some really great places that I thought I would share with you in this little guide.
HEALTHY RESTAURANTS IN BARCELONA
Below you find descriptions of each of them:

FLAX & KALE
This is a flexitarian restaurant which means that the menu is mostly plant based but also offers a few dishes with oily fish. All served in a really trendy setting in the area Raval just off the Rambla. The food is as innovative as it is fresh and we had a delicious meal here.

We started out with four fresh cold pressed juices and a big plate of “mezze” with a kale salad, three different types of incredibly tasty humus, some quinoa “meat” balls and some dehydrated seed crackers together with a cold potato-leek-kale soup with edible flowers.  For main course I had the raw pizza, Søren had a tuna burger and the kids had little salmon burgers in pink buns made with beet. They also had an extensive gluten free dessert menu so we tried the brownie (really good), the apple crumble with sweet potato icecream (also really good) and I had the banana-chocolate cake with walnuts (huge, good but slightly dry). We left the restaurant full and happy and I give this place my warmest recommendations.

The same owner also has the vegetarian restaurant Teresa Carlsen. We didn’t try it but I can only imagine that it’s every bit as delicious as this one. 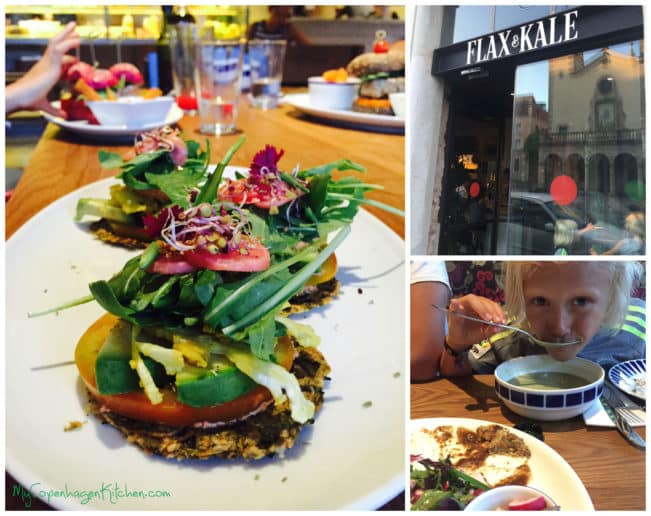 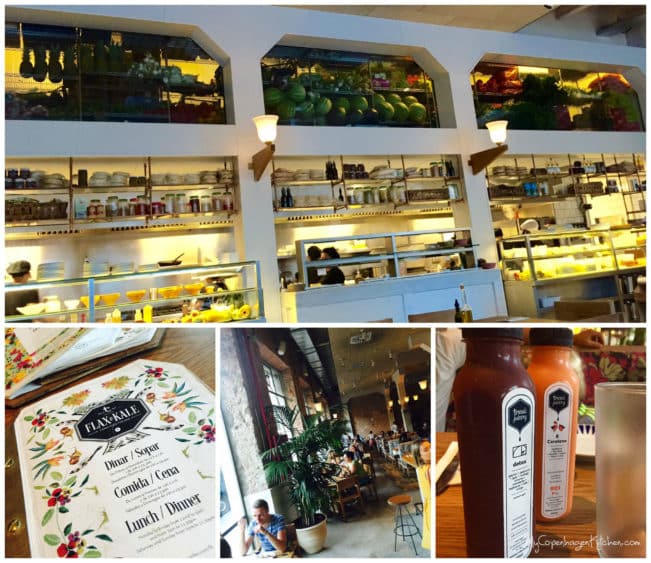 WOKI ORGANIC MARKET
This place is fantastic! It’s like a combination of a health store/organic food store and a restaurant meaning that you sit down and eat and your closest neighbor is a shelf with gluten free pasta or similar. Funny idea!

The menu is all organic as the name implies and there are so many healthy options. Silas, Søren and I had the wok which you combine yourself. I had shredded cabbage with mixed vegetables and chicken in a thai coconut red curry sauce. Large portion and fresh and delicious as well as gluten free, dairy free and low carb. Vega had the lasagne which she claimed was the “best lasagne she had ever had”. 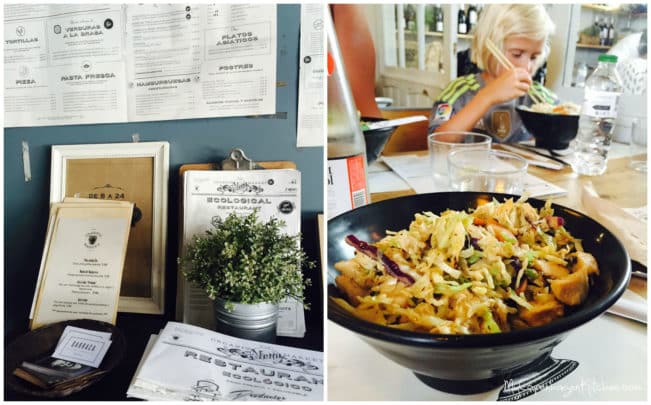 EL CAFÉ – RAW FOOD
El Café is a raw food café. We stopped by one day after visiting the Chocolate Museum (yes, Barcelona has a Chocolate Museum). We would have finished our visit by having a chocolate treat in their café but it was all too hot and chaotic so we left and stumbled upon this raw food café just around the corner. We went in a ordered coffee and a few desserts. The carrot cake with a cashew “cream cheese” frosting was by far the most delicious one. 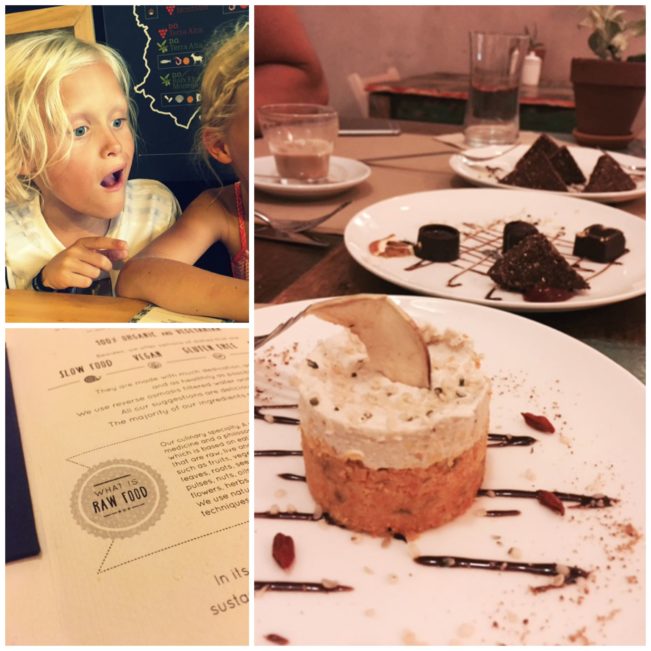 BACOA HAMBURGUESERÍA
This is in my opinion the best burger joint in Barcelona. Their beef patties are organic from grass fed beef and really tasty. You order your burger by filling out an order form with so many different options. It even has a no-bun option which is a plus in my book and you can have fried hand cut potatoes or salad instead of the regular fries.

You find BACOA several places in town (or a single KIOSKO burger which is the same family). We had our burger here: 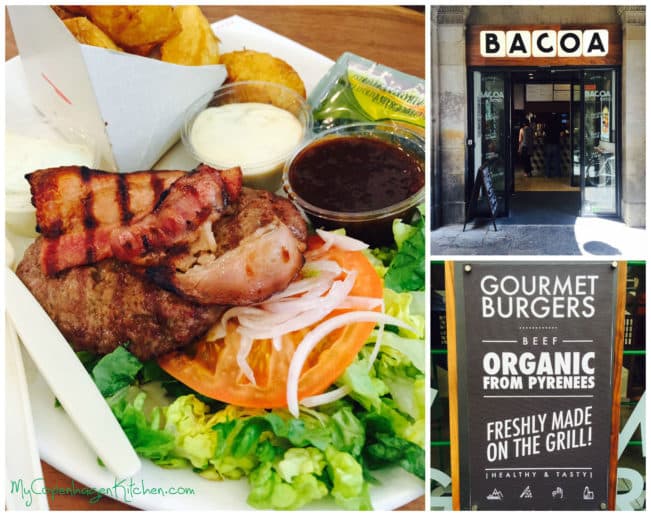 PALOSANTO
There are so many good tapas places (and some bad ones too) that it can seem unfair to highlight just one. But we had a really nice meal at Palosanto. They both serve tapas and more regular dishes in a trendy setting inside or on the terrace outside. We sat inside as it was so hot during our stay. Apart from the really tasty tapas that we shared for starter, Søren had a steak tartare with chips made from jerusalem artichokes, I had a salmon tartare with green apples and the kids had pork cheek with truffle mashed potatoes. 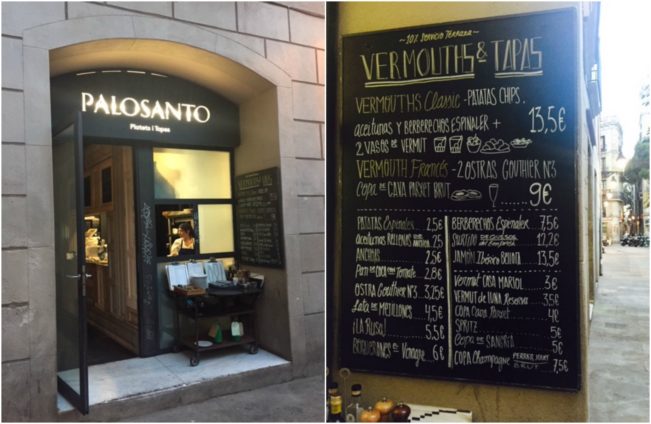 VERITAS ORGANIC FOOD STORE
We stayed in an apartment in the Gothic area and cooked our own breakfast every morning. The first day we went grocery shopping in the near by market Mercat Santa Catarina but later we found this organic food store that had more flexible opening hours that suited us better. It wasn’t as nice as some other organic food stores I’ve tried but it was great to be able to pick up some organic eggs and veggies at 10PM. 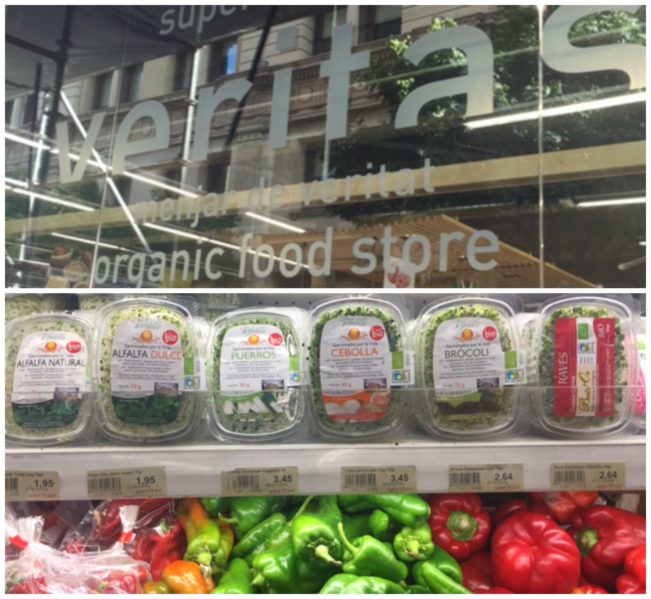